It may be more difficult or complicated but I like making food stuff from scratch.  Like butter and cream cheese…

Of course my homemade version is nothing like the famous Philadelphia brand (or even the local Magnolia!); for one thing it is less salty and a tad more tangy, but what I love about my homemade cream cheese is that I know exactly what went in it!

I (generally) followed the recipe for Real Cream Cheese in “Artisan Cheese Making at Home” by Mary Karlin. I varied in that I used cultured buttermilk (instead of mesophilic starter, as suggested by a friend) and I used powdered vegetable rennet instead of the specified liquid rennet. Reason for the variation? I could not find mesophilic starter or liquid rennet!

As usual, I used the “bird’s eye” cloth diaper to drain my cheese instead of butter muslin or “real” cheese cloth, for the same reason of the latter’s unavailability!

B: mommy, can you make me hot chocolate? With marshmallows?

(Of course, i had to deliver more than what was asked… added chocolate on the rim, and topped the whole thing with ice cream and choco syrup!)

(And after tasting it)

IT IS SOOOOOOOO YUMMMYYYYY MOMMYYYYY! You’re the best at making the best stuff!

I tried my hand at mixing homemade liqueurs last Christmas but for some unknown reason I skipped the recipe for homemade Irish Cream.  Maybe it was the astronomical price for Irish whiskey…

This year however, I decided that i would try to make the recipe even if I used ordinary whiskey!!!  I don’t know what difference it would make in the recipe but at the end of the day, plain whiskey is what I can afford (and believe me, the price of the real Irish Cream is cheaper than the price of Irish whiskey!!!)

So I followed this recipe and it’s fantastic!  When they said that the homemade version is way better than Bailey’s, they weren’t kidding!!! 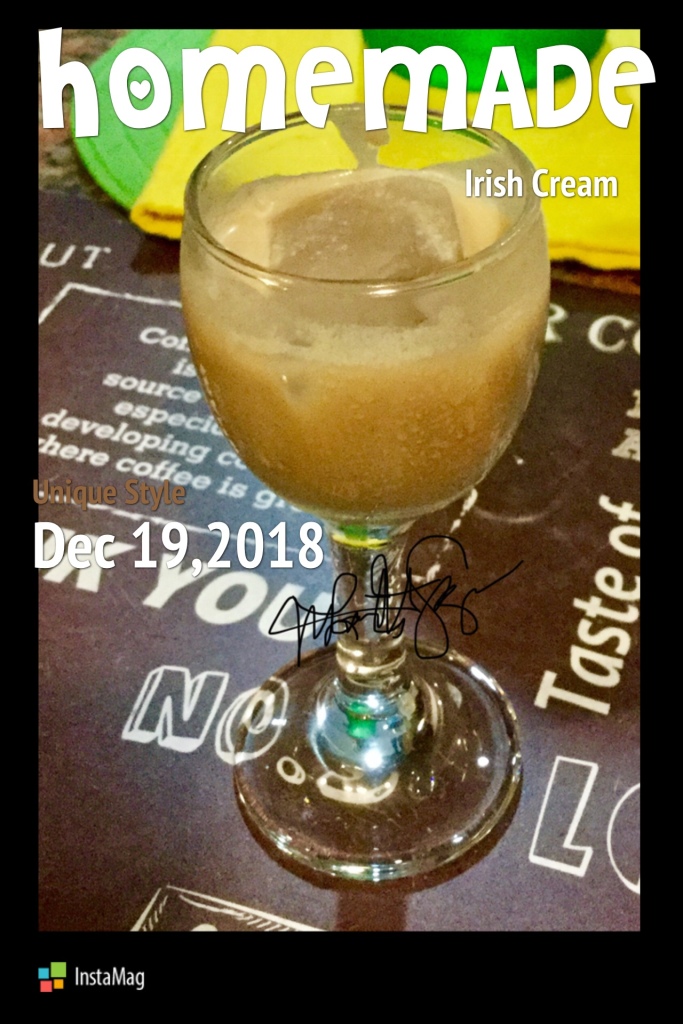 It is sooooooo yummy that I will be  making another batch in the next few days!  The recipe says that it is good for 2 months in the fridge.  Well, I know this for sure – it will long be gone before then!!!

I say “finally” because I have found what I was looking for – a great tasting fruitcake whose recipe is fast (truly fast with no need even for a mixer!), simple, easy, and even when it’s last minute!

After much experimentation that began in July, here it is!!!

It is so fast and easy that even if it’s mid-December already, I can still bake it and give it the day after.  The texture is great – moist but not breaking apart… it is not too heavy but it is not light at all… it is chockfull of fruits (which admittedly is the most time consuming of all – with dicing big fruits and soaking it in brandy for more than 3 months), and IT IS DELICIOUS!!!

I bake it right in the “pan”, brush it with more brandy, cool it in the same container then just cover it with the see-through lid that is part of the package (or in one case where I broke the lid, cover it with clingfilm).  Then I just stick a label on it and send it – DONE!

(will post the recipe later after I’ve organized everything.)

For now, I will enjoy baking this last minute fruitcake and then sit back while the recipients compliment me!

I love cooking and baking for others.  Hubby even jokes that even if I have no recipients for the goodies I make, I will still bake and give them to any Tom, Dick or Harry on the street, or to just about anyone who would accept them!

When someone makes something in their kitchen for me… That is when I feel blessed… extra special… and, super loved…

Thank you BFF for the special treat! 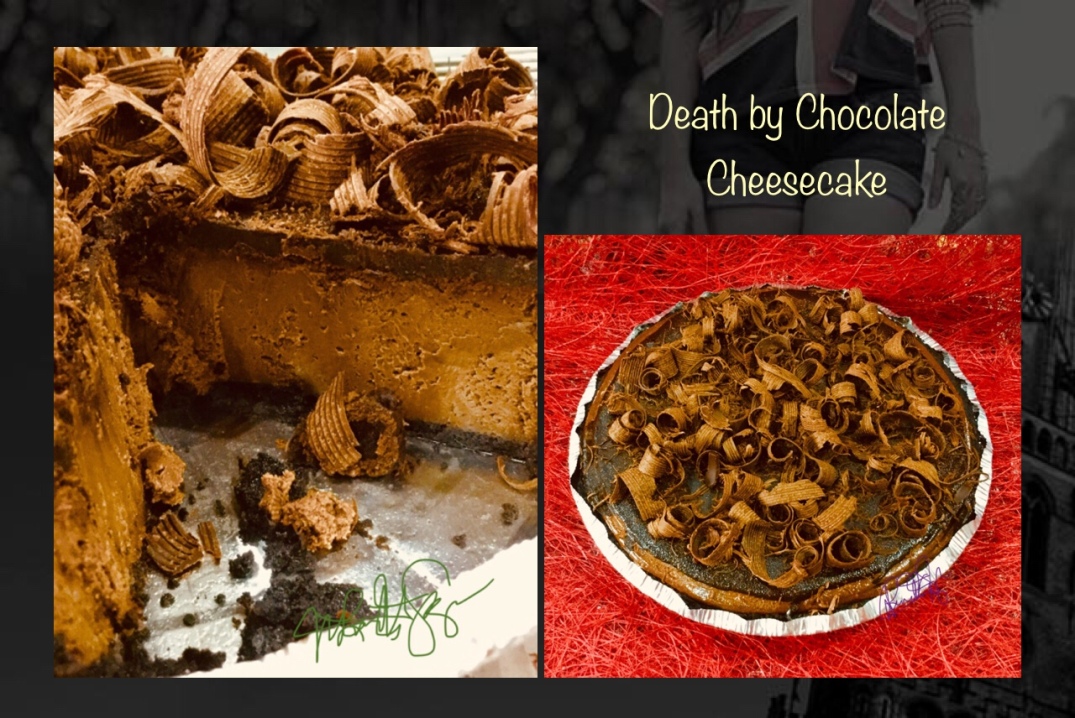 I admit it. I have been obsessed with chocolate lately. I’ve made bourbon brownies, 2 toned chocolate and choco chip cookies, in addition to the usual, standard stuff I make. And I’m not yet done. Still on my list are Kladdkaka, Tableya Cupcakes, Creme de Cacao… and this Chocolate Cheesecake, which has been dubbed Death by Chocolate Cheesecake.

For this one I delved deep into my cookbooks. Both hubby and the kid are chocoholics, and both are very particular when it comes to chocolate – they have discerning tastes! They prefer a deep, complex, nuanced chocolate flavor. I finally hit the jackpot when I found this recipe in a special edition “magazine” of Fine Cooking.

I started with a ready-made, off-the-grocery-shelf Oreo cookie crust. I know I could have made my own chocolate cookie crust but having a ready-made one DOES give me more time to concentrate on the filling, which I believed was more important! The downside though is that the ready made crust could not contain the full recipe for the filling. So I had to polish my math skills and scaled the recipe to about 2/3 – even then I was afraid that the batter would spill over in the oven. But all is well that ends well, the batter puffed up during baking but settled in nicely upon cooling…

The recipe did not specify a topping but I had in my mind a chocolate masterpiece with 6 layers of chocolate! I imagined (1) chocolate cookie crust, (2) double chocolate cheesecake filling, (3) silky ganache topping, (4) dark chocolate curls, (5) chocolate syrup drizzle, and (6) chocolate ice cream on the side!

For the silky ganache topping, I wanted a “softer” consistency, so instead of a 50-50 mix of chocolate and whipping cream, I used a 40-60 proportion, using a bit more cream than chocolate.

For the chocolate curls, I finally used the gourmet dark chocolate bar that my brother-in-law gave as a present.

While I had envisioned the 6 layers, I ended up with just 4 because hubby decided that it was overkill (pun intended!) to go beyond the chocolate curls. (The kid happily doused her slice in chocolate syrup though, but skipped the ice cream so at least for her it was 5 layers!)

And, just like that, I am the kid’s hero again! I just love hearing her proclaim – Mommy you are the best cooker and baker ever, ever! (Her exact words)

While mine was delicious, it did not look like the ones served in restaurants.  Those were really black while mine were, well, a bit brownish greyish…

And I used real squid ink too.  From about 700 grams of squid, I was able to get more than 1/2 cup of squid ink.  Perhaps I could get better results if I use commercial squid ink paste?  Then again, I don’t know where to get it!

(In a paella pan) heat half the olive oil. Stir fry the shrimps and squid for a couple of minutes. Remove from the pan and set aside.

Add remaining oil in the pan and saute the garlic and onion until soft and translucent. Add the diced tomatoes and pimientos.

Add the rice and stir fry a couple of minutes. Add the white wine, squid ink, stock and hot water with saffron. Stir lightly then cover. Cook on low, low-medium for 20 minutes approximately, stirring occasionally. Check once in a while if more liquid is needed. Likewise, check the seasonings, if needed.

Mix in the shrimp and squid (top decoratively with a few, if desired) and cook another 5 minutes. Garnish with boiled egg slices. Serve with lemon wedges.

This is a version that I specifically made for a special order five or six years ago.  Someone asked me if I could make a healthier version for her mom who loves dates and walnuts but has issues with fat/cholesterol, sugar… the usual culprits that make the lives of the elderly difficult.  After several experiments, this was the winner!

So, this cake – no egg, no butter or oil!  NO CHOLESTEROL!  Low is sugar, except for the inherent sugar in dates… AND, AND…  IT HAS A BEAUTIFUL TEXTURE (very moist!) AND GREAT TASTE!

Check out the (estimated) nutritional analysis – 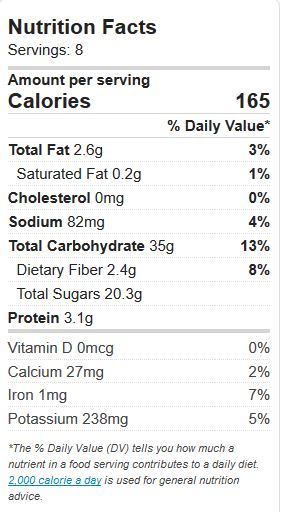 6 years ago, I made about 60 of these (in addition to some others) in ONE day!  To be honest, the baking was not the part I found tedious.  It was the packing and washing.  You see, I DO NOT have 60 or so pans to bake in.  At most I have 8 or so (maybe 10 max) so the waiting time is tedious and then I have to wash up (and dry!) before I could use the pans again.  THEN!  I had to fold boxes (although the kid and hubby helped a lot) and tie ribbons, etc. etc.

These days, I am so relieved to find a baking pan and gift package in one!  The base is made of thick cardboard and is coated with some sort of film.  The cake is baked in it (the store said it was a direct-bake package) and cooled in it.  The cover is a clear plastic that fits perfectly.  It saves time, effort and money (the whole package costs less than a cake box and cake board)!  I love it!!!