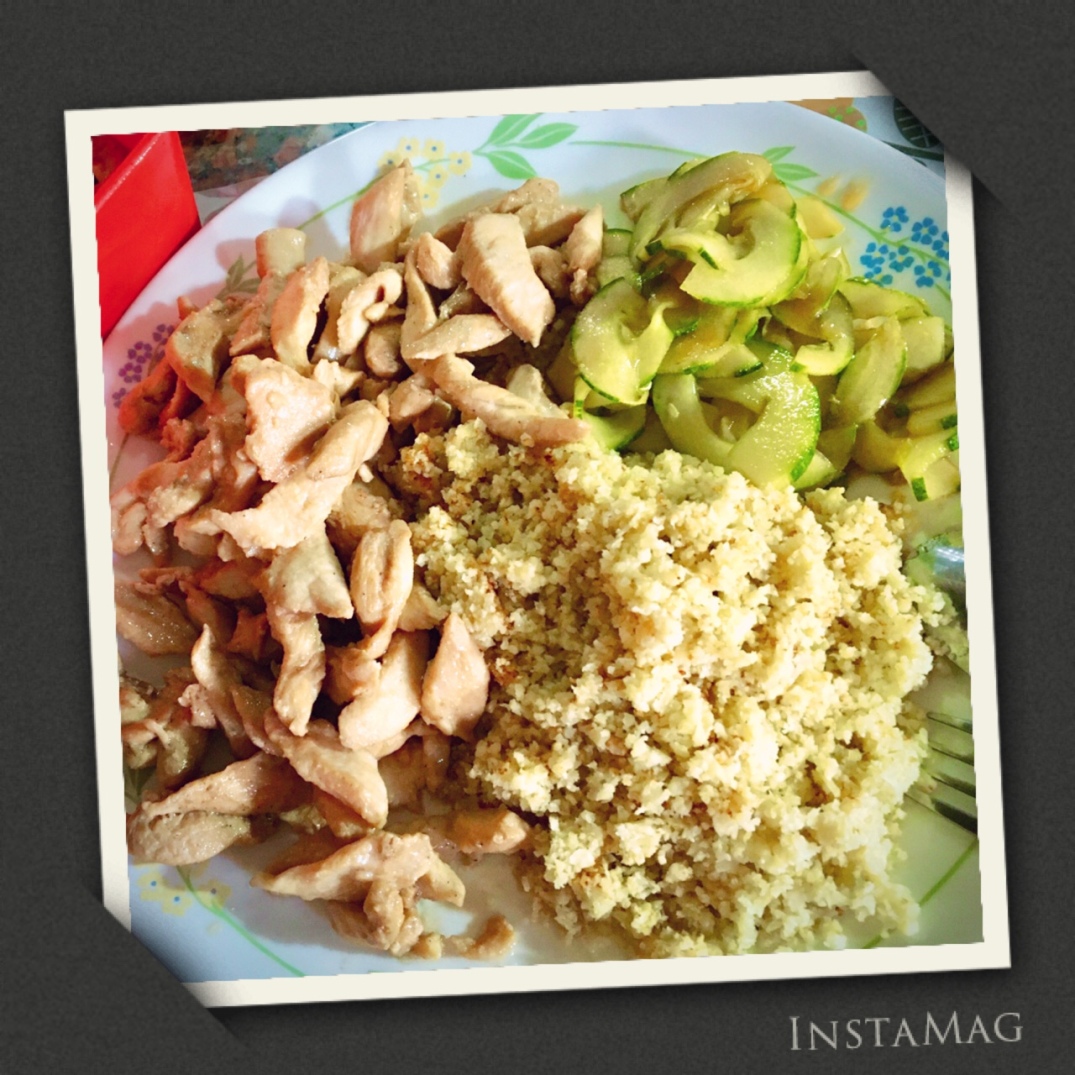 (#6 and #7 in the limited series: “cooking/baking in the time of the corona virus quarantine”)

Week 1 is almost over.  I must admit, I am finding it difficult to plan menus… It’s not that I don’t have ideas, but we have limited ingredients and it’s not like I can go to the supermarket anytime I like for any ingredient that I may not have at home…

What is especially challenging are vegetables, which hubby needs and loves.

For the Chicken Bulgogi –

Stir-fry the chicken (reserve marinade) over medium heat (watch the pan because the chicken may get burned otherwise). If the pan gets too dry, add the marinade by tablespoons. If desired, toss cooked chicken with 1/2 teaspoon toasted sesame seeds.

For the Japanese-style cucumber salad –

2 pieces cucumbers – Rinse. Scrape out seeds.  Slice thinly into half moons.  Toss with a little salt and let stand about 30 minutes.  Rinse again and squeeze out excess water.  Toss with the dressing.  Chill at least 30 minutes before serving.

Mix together until sugar is dissolved. 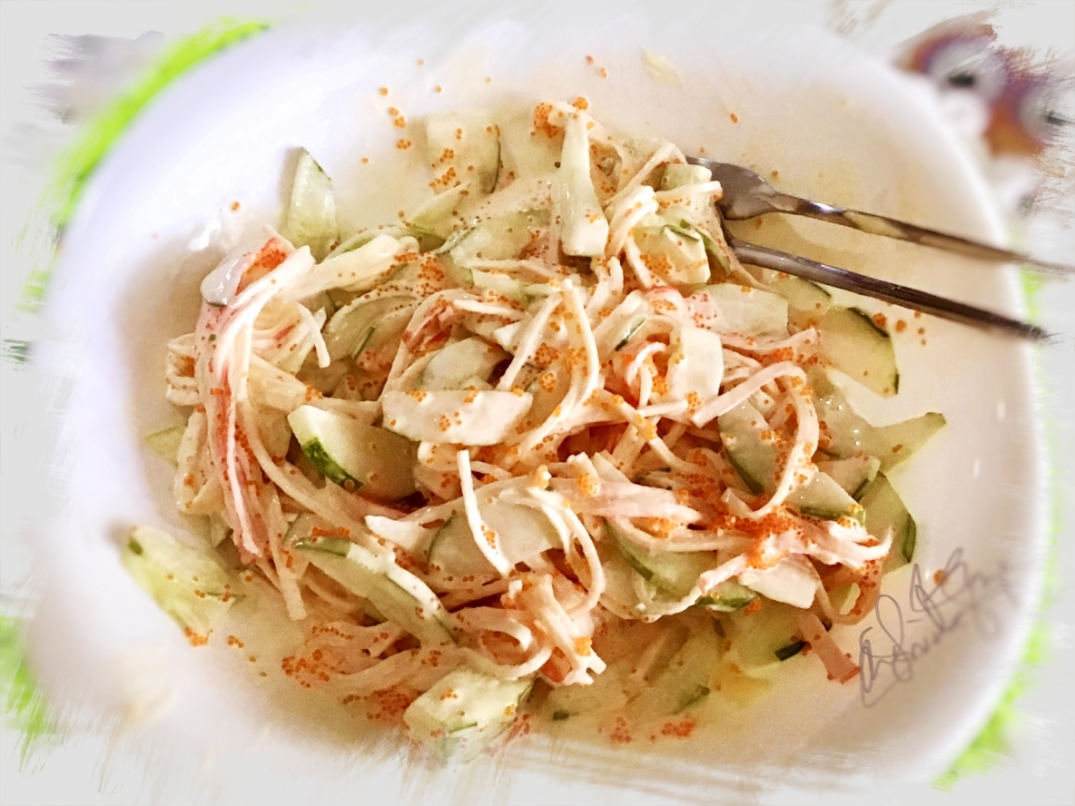 (#4 in the limited series:  “cooking/baking in the time of the corona virus quarantine”)

Barely a week into the month-long imposed community quarantine period, our friendly neighborhood vegetable vendor informed us that he would not be going around with his vegetable card.  While he still wanted to do his daily rounds of vegetable selling, it seems that his family has firmly put their foot down and told him to stay home or else.  Not that we blame them!  Everyday the news reports of more and more infected and falling ill, worse, dying or dead already.

Anyway, because of his announcement we went on a buying frenzy, getting most of his stock, at least those that we felt would last at least a week.  Among the vegetables we got were cucumbers – and I happen to like cucumbers!

But, the awful truth was that cucumbers are vegetables with limited “applications”… a quick look in the freezer and I saw some kani (Japanese crabsticks) and tobiko (flying fish roe)!  And wonder or wonders, there was Japanese mayo in the fridge.  Well then, hello Kani Salad!

The recipe is so easy!  Clean the cucumbers and slice.  Ideally it should be in long thin strips but I had no patience for that so I ended with thin half-moons.  Shred the kani and toss together with the cucumbers.  Add the Japanese mayo and a teaspoon or tablespoon of the tobiko and toss.  Chill before serving. 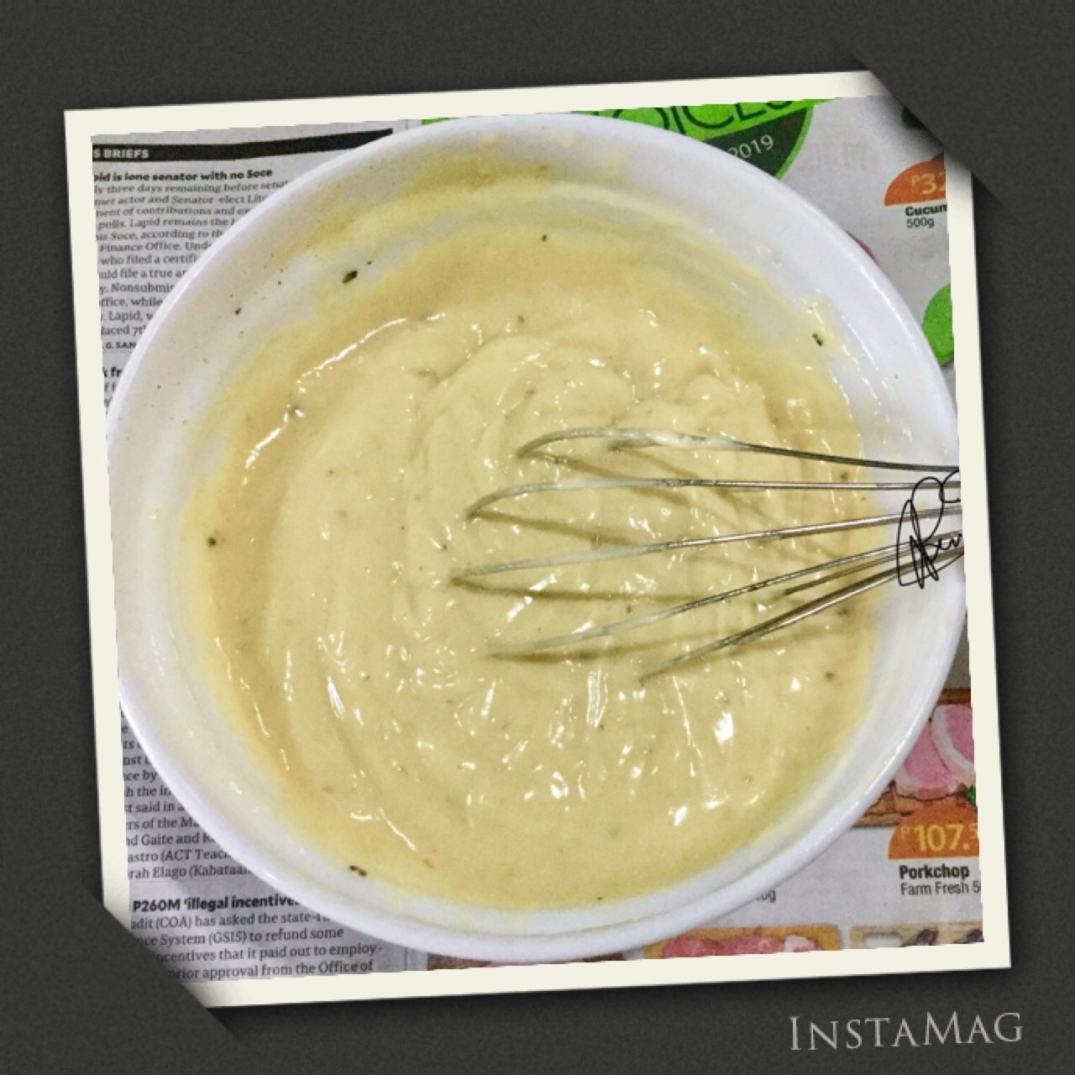 Much as I like eggs and in fact, I have one every morning for breakfast, I have thing against raw eggs… I just don’t eat raw eggs!  This means I cannot technically make ceasar dressing from scratch (the traditional way).

It’s a good thing then that I found this caesar salad dressing from Rock Recipes!  It is perfect!

Hubby likes it and has requested me to make it again! 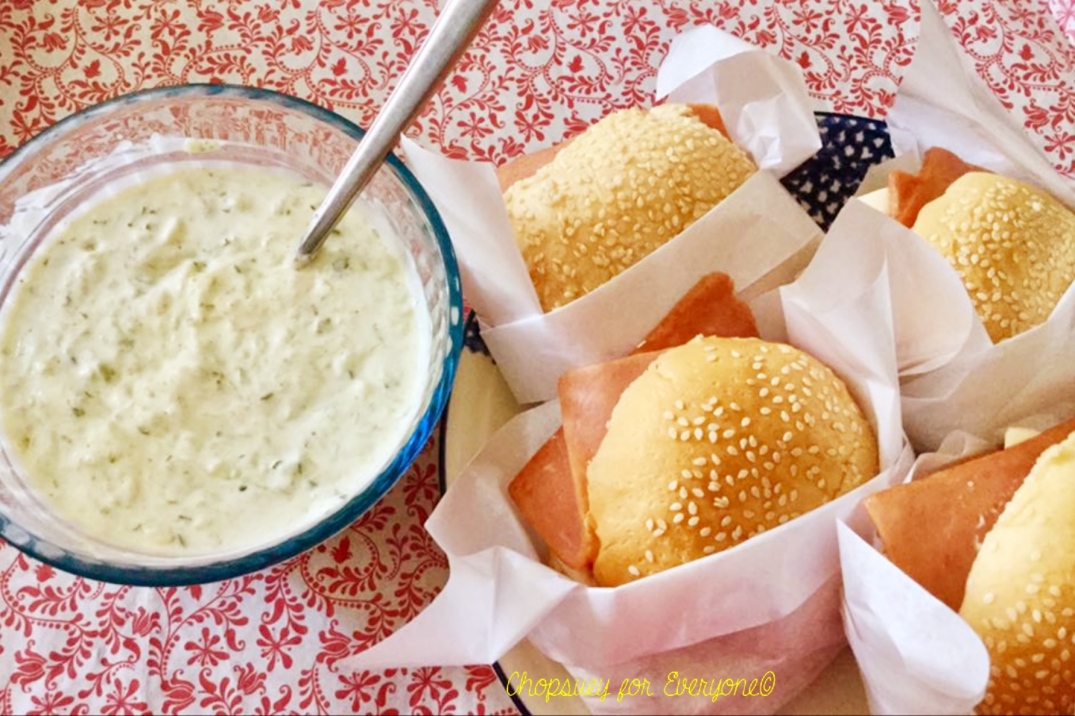 or basically yogurt and cucumber salsa (?)

I made some homemade bread rolls with the whey that was the result of draining the yogurt that I made. There was a lot of whey and a lot of yogurt! I was not able to send it to the usual recipients so I got stuck with it.

Make something out of it, right?

(We served it with the homemade rolls and spiced ham.) 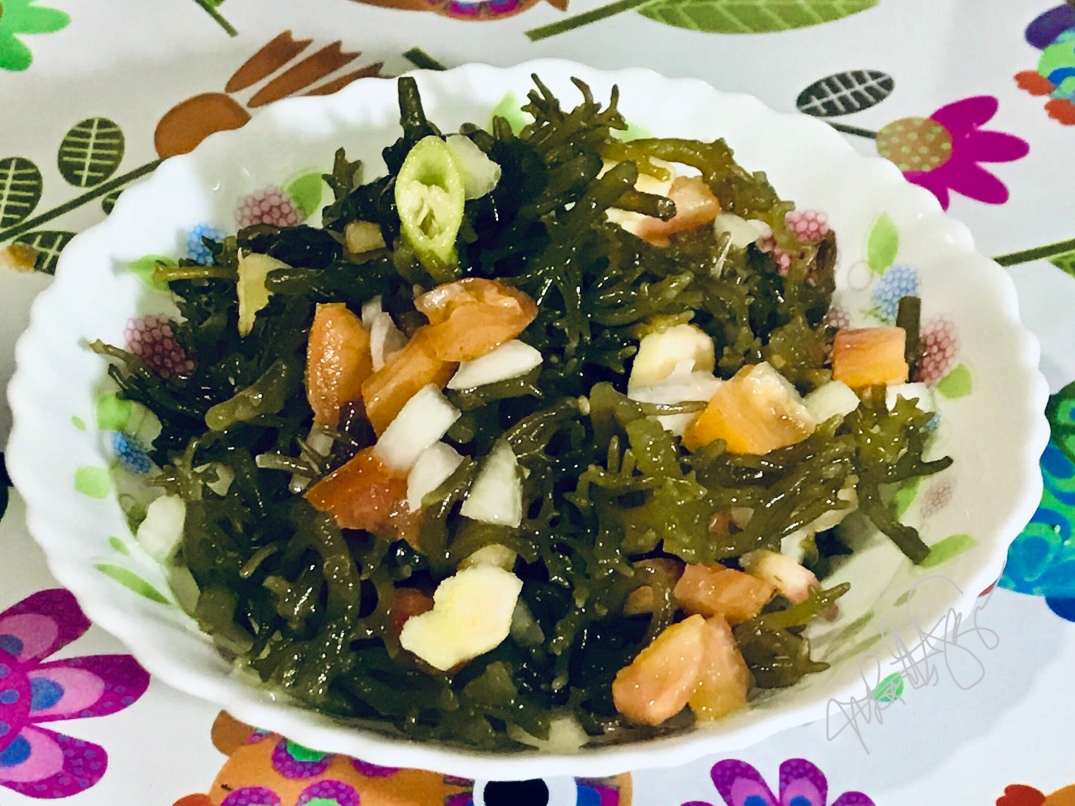 Are seaweeds vegetables? I don’t know but I think that seaweeds are plants in water, hence, they are more like vegetables than meat or something similar.

The seaweed that I am familiar with is the latô – which I know to be called sea grapes because they look like small grapes. And, at the specialty seafood market south of the metropolitan city, there were several vendors offering the latô for sale. I was, in fact, about to buy some when my eyes chanced upon the sole vendor with something different for sale – gusô – another kind of seaweed. The term “guso” however is a local dialect’s word, Visayan to be specific. I don’t know what it is in English or Filipino.

In any case, the recipe to make gusô salad is the same as the latô – basically a kilawin, which is in a marinade of vinegar (a special spiced vinegar such as sinamak) and tossed with lots of ginger, red onions, tomatoes and chilies.

It is important, however, to blanch the gusô in boiling water and the immediately plunging the gusô in ice water before letting it sit in the kilawin mix.

I loved the salad so much that I went back and bought some more!!! 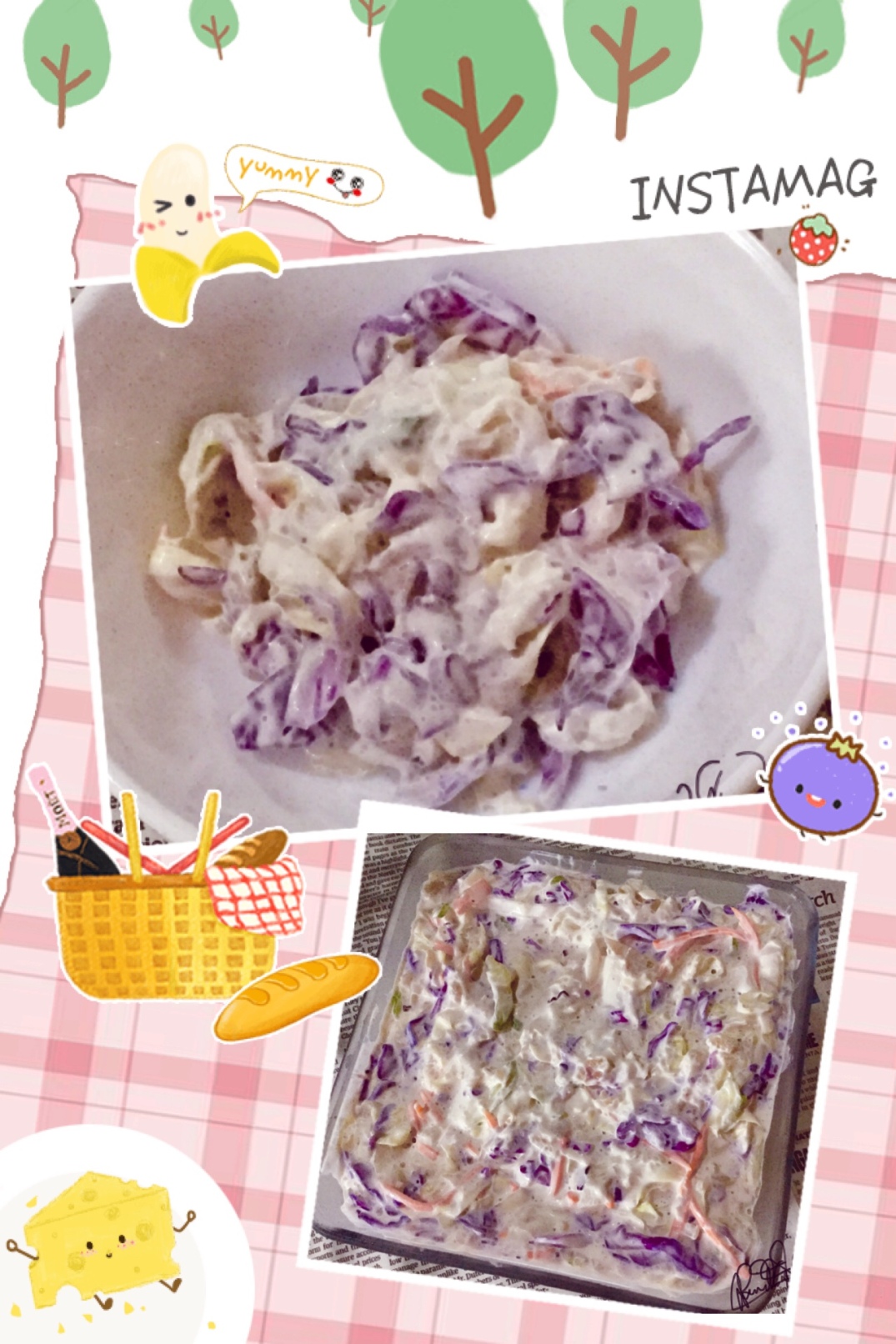 Who doesn’t like KFC chicken?  I am a fan!  But there is something else they sell that I really like – it’s their coleslaw!!!  I like that it is minced and that it has pineapple.  I like that the dressing is sweet…

But when I make my own I make it differently.  Why?  Well, because I am lazy! I just shred the cabbage and even if I would like to mince the cabbage, I am simply too lazy!!!  Plus, hubby seems to prefer crunchy slivers to tiny minced pieces…

In any case, it is delicious!  Even if I do say so myself! 🙂

1 medium head of cabbage, shredded
1 small head purple cabbage, shredded
(should come up to 2-1/2 to 3 cups of shredded cabbage total)
1 medium carrot, shredded (about 1/4 cup)
1 small can crushed pineapple, drained
1/2 to 3/4 cup mayonnaise, or to taste, as preferred
1 tablespoon minced celery
1/4 to 1/2 teaspoon salt (or to taste)
ground pepper, to taste

Toss shredded cabbage, carrots, and drained crushed pineapple tidbits together. (Some of the coleslaw I’ve eaten have raisins and minced onions i them but I prefer mine without. You may add them, if you prefer or as you like.)

In a separate bowl, mix together mayonnaise, minced celery, and spices. (Just to let you know my brother likes his coleslaw with a dash of mustard!!!) Add vegetables and toss to mix. Chill at least 4 hours. 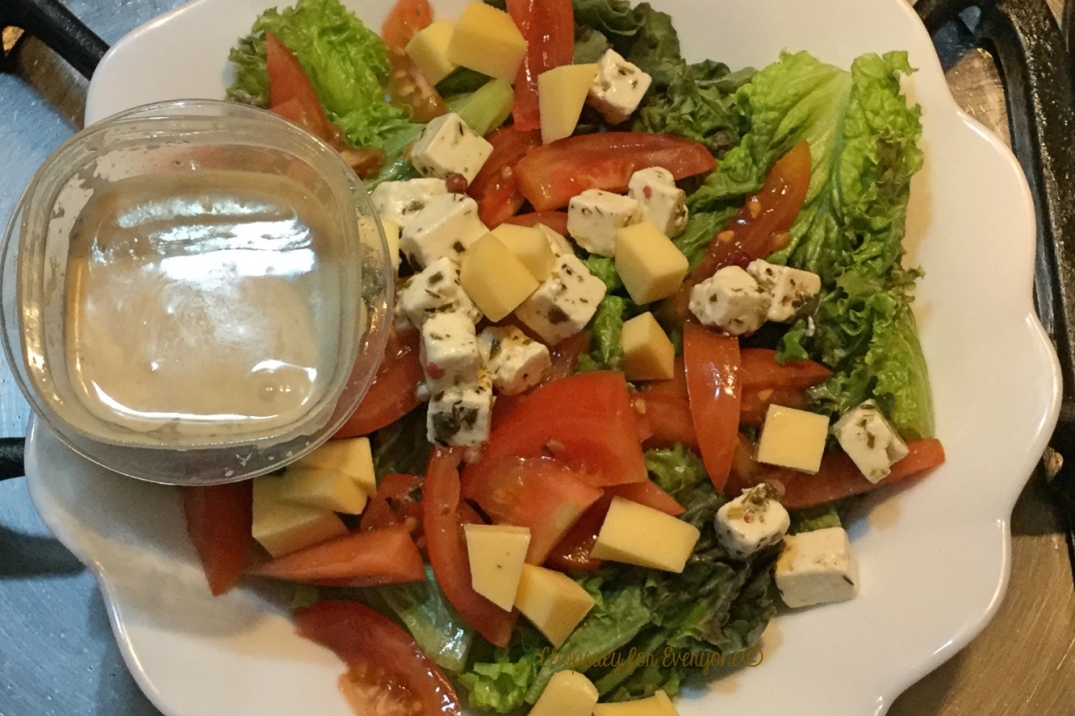 Ever since I learned how easy it was to make vinaigrette, I’d been experimenting with all sorts of combinations.

For this salad – mixed greens, sliced tomatoes, feta and double-cream cheese, I decided to use up the leftover anchovies in the fridge. 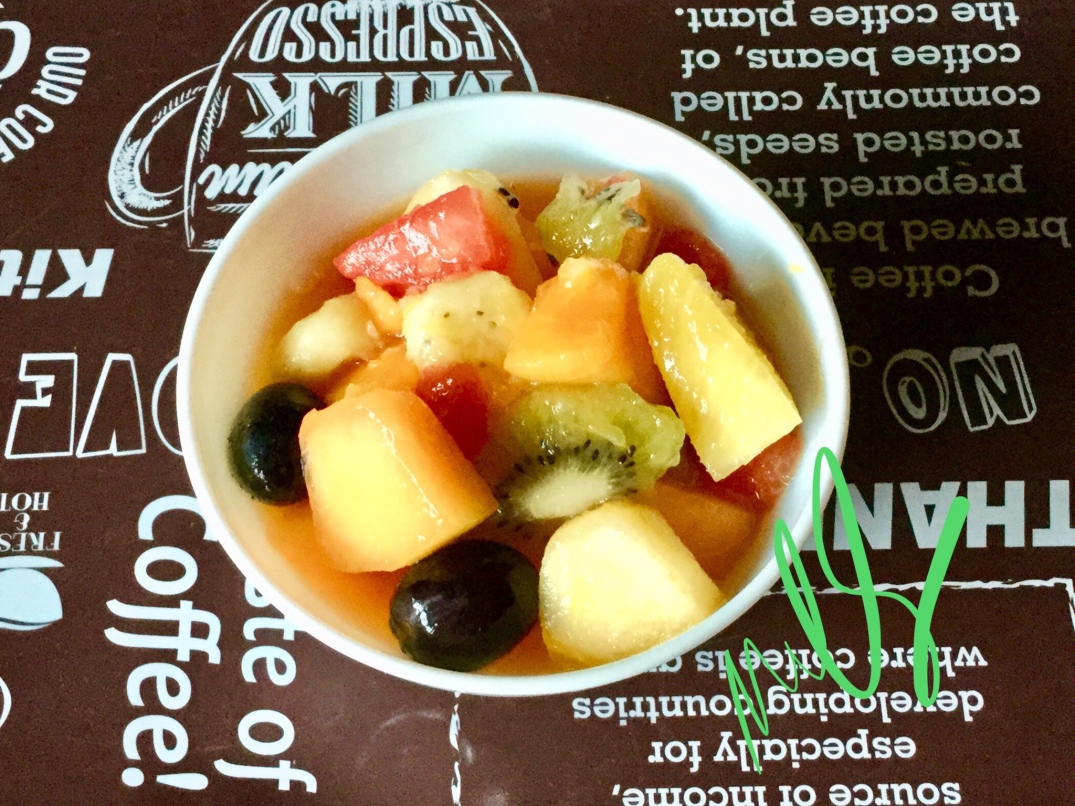 The fruit salad recipe that we are used to is the one with cream and fruit cocktail, or maybe even buko (coconut) and condensed milk.  Some years ago, however, I discovered one that was perfect for hubby, who loves fresh fruits!

A very special lady, Tita Linda, shared her recipe with me several Christmases ago.  It was quite easy – just cube fresh fruits of your choice and toss them in a fruit salad bowl.  Squeeze lemon or calamansi juice and sprinkle some sugar (or sugar substitute) to taste and toss until mixed.  Serve chilled.  Viola!  Great dessert.

Sadly, Tita Linda passed away last year.  We miss her so and remember her this Christmas through her fruit salad. 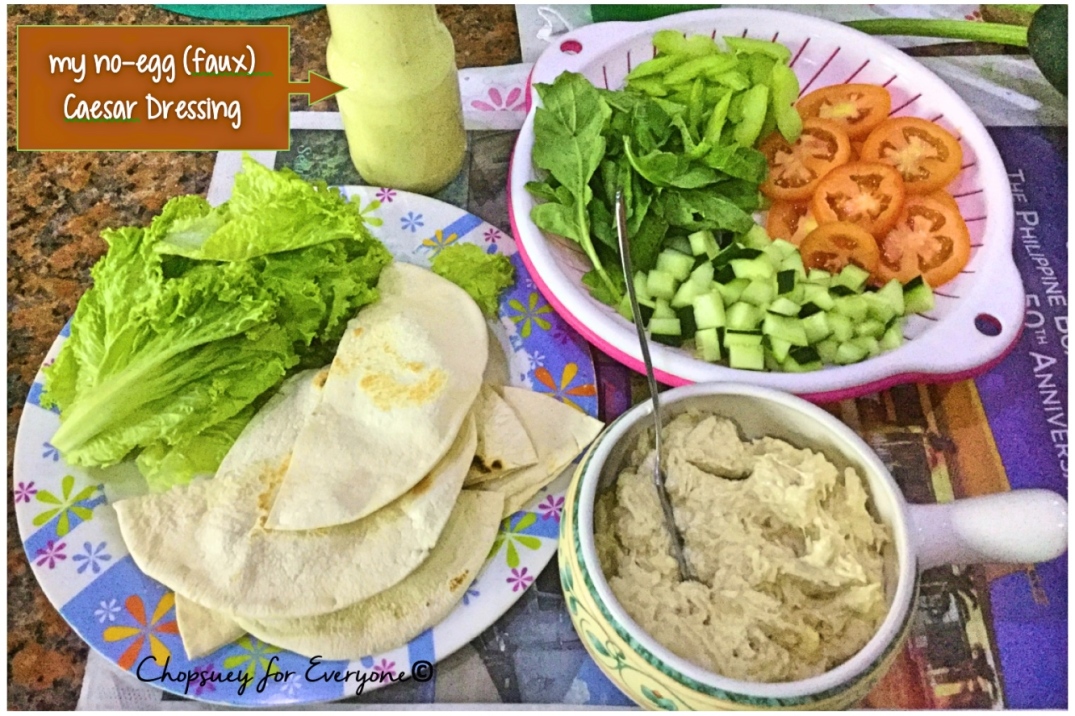 Some of hubby’s friends come to the house regularly (we refer to them fondly as “the boys”) and I like feeding them!

The last time they were here, I served them “Make-your-own-pita” sandwiches.  I had originally planned on curried chicken as a filling but at the last minute, having discovered that *someone* used up my curry blend, I had to find something else… that’s when I saw the bottle of (faux) Caesar Dressing that I had made a couple of days ago.  So instead of curried chicken to be stuffed in the pita bread, it became Chicken Caesar!

It was a great hit! 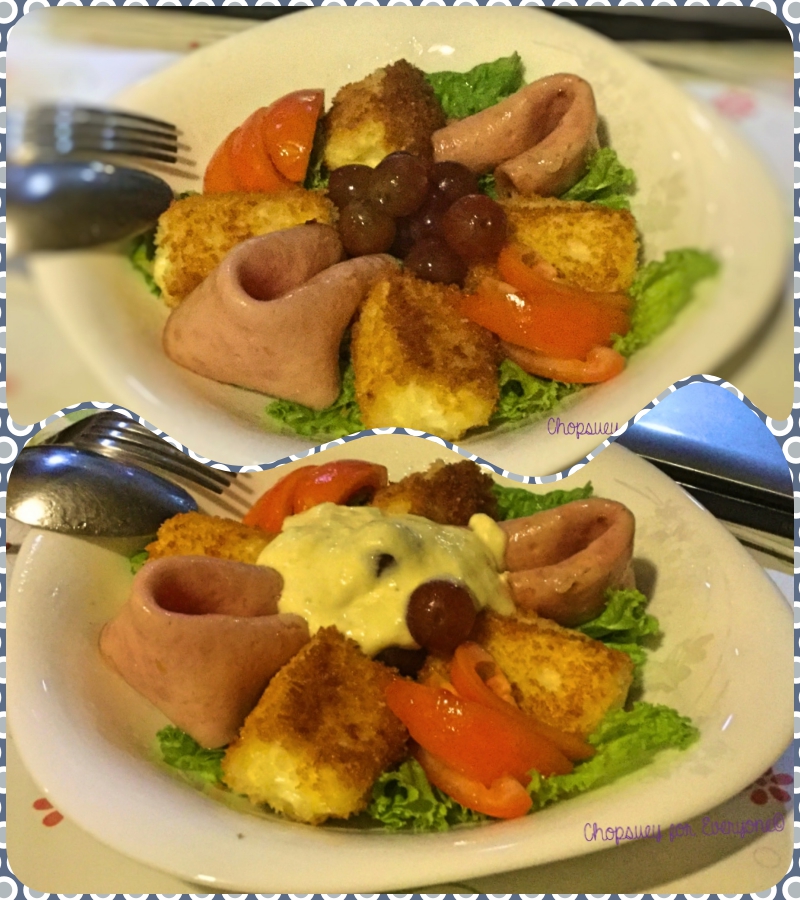 I recently had a taste of fried kesong puti and I loved it!  (which is surprising because I am not a fan of kesong puti.)  So long story short, I wanted to make a salad with fried kesong puti… and since I did not want a vinaigrette this time, I had to fall back on my faux Caesar Dressing…

milk, to thin the dressing if necessary

Mix the mayonnaise, lemon juice, mustard and garlic together.  Slowly add the cooled anchovy-oil mixture and beat well.  Adjust the seasonings as desired.  If the dressing is too thick, thin with a little milk.

For the fried kesong puti, slice the kesong puti into large cubes.  Roll in flour, then dip in egg, then roll in panko (Japanese bread crumbs).  Pan fry (on all sides to even out the color). 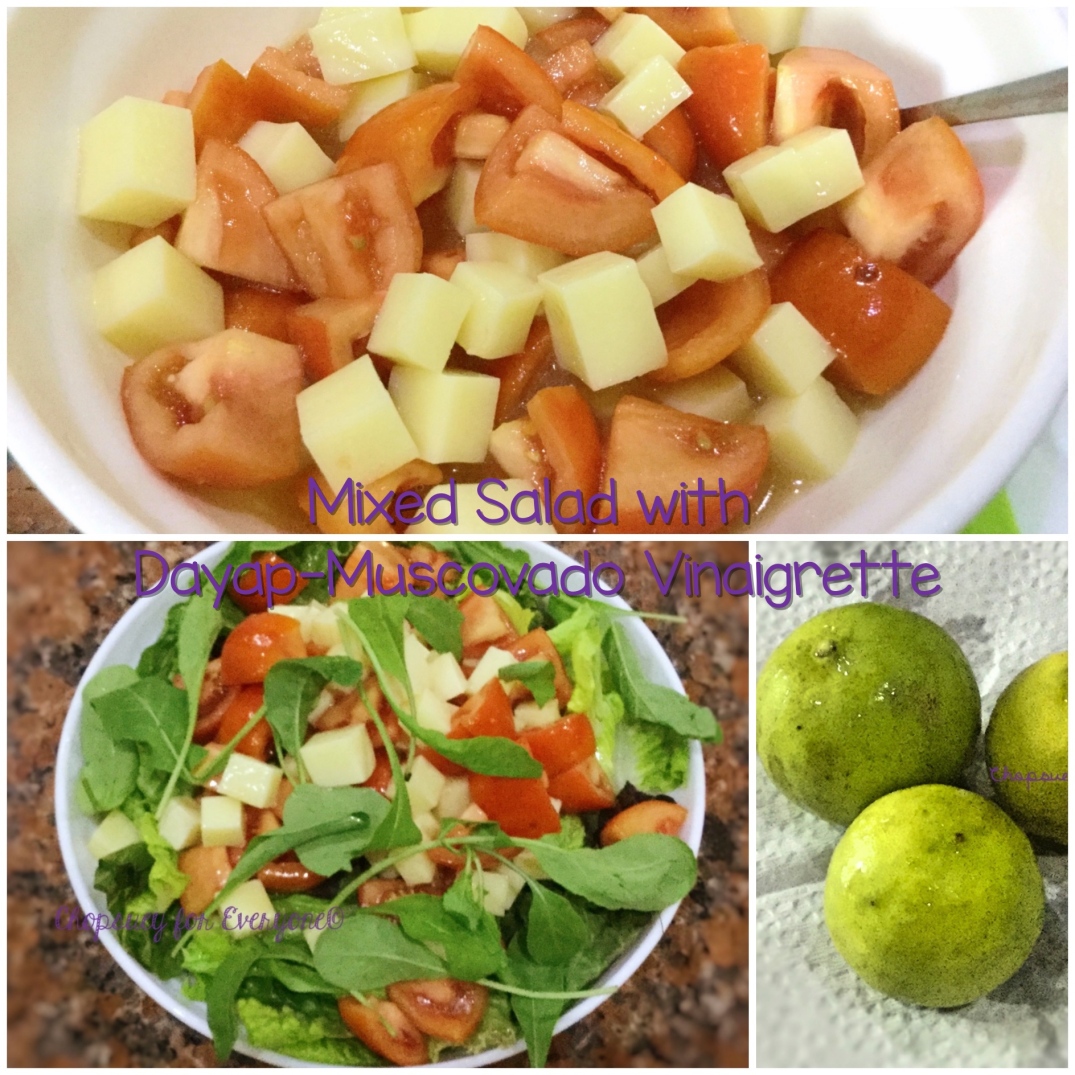 My dayap plants have been busy… but what to do with a lot of limes?

Well, I got the zest and froze them so that I could have some to use in the future…

But as for the juice?  Well, one can only take so much lime juice (or its variations) so I used some to make Dayap-Muscovado Vinaigrette!

In a shaker, mix 1/4 cup olive oil, juice of 1 to 2 limes, 1- 2 tablespoons muscovado, freshly ground black and white peppercorns, and 1 to 2 large pinches of pink sea salt (vary the proportion according to your individual taste).  Seal the container and shake, shake, shake!

Pour over salad greens and enjoy! 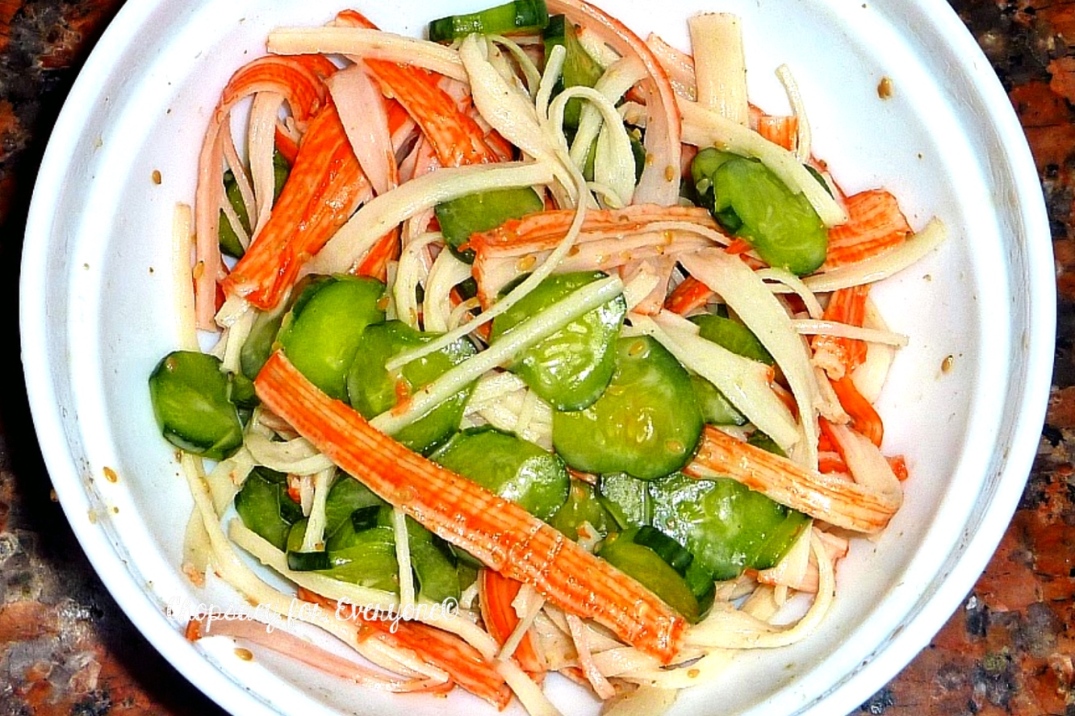 Cucumbers have a special place in my heart.

I remember that it was a favorite diet food – cucumber salad – a couple of decades ago when we were college students. As college bud S says, back in those days we thought we were fat, but now we realize we may have been chunky but we were (definitely) not fat.

Anyway, I was killing time at the supermarket sometime ago and I saw organic Japanese cucumbers! I immediately thought of hubby and how much he liked the Japanese cucumbers we had a couple of weeks ago at a Japanese restaurant. I also remember how much I liked cucumbers and suddenly I had a craving for it.  So of course, I bought some.

My mom told me that cucumbers needed preparation otherwise it would exude water and ruin the dish. I assume that the preparation applied to all cucumbers, even the Japanese ones, so after peeling strips of skin then slicing the cucumbers into not-so-thin slices, I tossed them with sea salt. The salted cucumbers sat for about 10 minutes (after which a significant amount of liquid came out), after which they are rinsed and then drained for another 10 minutes.  Pat the cucumber  pieces dry with (a lot of) kitchen towels!  Chill in the refrigerator while making preparations for the rest of the ingredients for the salad,

Prepare the cucumbers as mentioned earlier.  Mix the dressing ingredients together then toss with cucumbers.

A side note here – I find that too much dressing tends to overpower the cucumbers and then I feel the salad becomes distasteful.  So I add the dressing gradually. And I tend to usually have leftover dressing.

As far as I am concerned, I am perfectly happy with the salad as is. 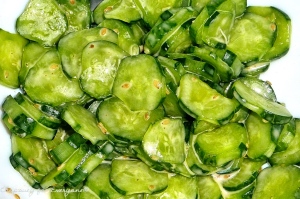 But hubby likes crabsticks and asked if we had any. We had about 7 pieces left, so I added them to the salad, and added some dressing as well. Turns out my dressing was just enough with the crabsticks added.

In any case, the addition of the crabsticks served to enhance the salad.  The salad is delicious either way